Menu
Welcome visitor you can login or register Phone Orders 888-212-8871
View cart “SHPILKES” has been added to your cart. 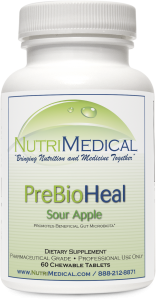 PrebioHeal™ provides the gastrointestinal tract with
xylooligosaccharides (XOS), prebiotic fermentable fibers that promote a
healthy balance of gut microbiota to help maintain digestive health.*
Available in 60 chewable tablets
Discussion
Every individual has a unique profile of gut microflora that plays a role
in their digestive health and ultimately their overall vitality. Probiotics
are naturally occurring friendly bacteria that exist primarily in the small
and large intestine. They are taken orally for the purpose of recolonizing
beneficial microflora species. Prebiotics are fermentable fibers that are
neither digested nor absorbed; they provide nourishment for the gut
microbiome and promote the healthy environment needed for probiotic flora
to thrive. Specific kinds of prebiotic fibers can allow proliferation of some
species over others, which can lead to a beneficial balancing effect in the
gut microbiome.*[1,2]
Commonly used prebiotics include xylooligosaccharides (XOS),
fructooligosaccharides (FOS), galactooligosaccharides (GOS),
soyaoligosaccharides (SOS), and isomaltooligosaccharides (IMO), all of which
were classified as prebiotics in the 2007 Food and Agriculture Organization
of the United Nations Technical Meeting on Prebiotics Report.[3] These nondigestible carbohydrates naturally occur in small amounts in a wide variety
of foods and vary slightly in their molecular configuration. Prebiotic fibers
escape digestion in the upper gastrointestinal (GI) tract and are fermented
in the lower GI tract where they promote the growth of beneficial bacteria.
This is achieved when the healthy microflora produce beneficial short-chain
fatty acids (SCFA). It should be noted that therapeutically effective doses of
some prebiotics may cause uncomfortable side effects, such as gas and
cramping.*[1,4,5]
Microbial bacteria are classified taxonomically according to phyla, classes,
orders, families, genera, and species. The two most dominant gut microbial
phyla are Firmicutes (F) and Bacteroidetes (B). Human and animal studies
have identified differences in the Firmicutes/Bacteriodetes (F/B) ratio in gut
microbiota in obese compared to lean subjects. It appears that in obese
subjects, a reduced Bacteroidetes proportion occurs; it is observed as an
increase in the Firmicutes Lactobacillus species and a decrease in the
Bacteriodetes Bifidobacterium species compared to lean subjects.*[1,6]
Xylooligosaccharides are 5-carbon oligosaccharides derived from the xylan
fraction of plant fiber that have demonstrated a positive effect on the F/B
ratio in the gastrointestinal tract. The beneficial effects of XOS prebiotic
fibers are typically observed with a lower dosage compared to 6-carbon
prebiotic fibers (like FOS or inulin), which could explain the lack of side
effects seen with XOS.*[1,2]
PrebioHeal™ features PreticX™, an XOS prebiotic fiber selected as a
component of a patent-pending gut health composition.[7] In 2018, the
European Food Safety Authority (EFSA) approved XOS as a novel food
obtained from corncobs via enzyme-catalyzed hydrolysis.[8] PreticX has
been shown to have an optimizing effect on beneficial microbes at lower
doses than other prebiotic fibers. The low, effective dose is a convenience
as well as a contributing factor to the comparatively less reported side
effects. Additionally, the benefits resulting from promoting the Bacteriodetes
Bifidobacterium species occur without the promotion of less desirable
Firmicutes species in the GI tract, and this ultimately leads to a healthier
microflora balance. A double-blind, randomized, placebo-controlled study
determined the tolerance and effects of XOS on the composition of colon
microbiota, pH, fecal SCFA, and lactic acid in healthy adult subjects
(N = 32) who received a 2.8 g dose of PreticX or placebo daily for an
eight-week intervention period. The XOS were tolerated without significant
gastrointestinal side effects. Bifidobacteria counts increased significantly in
the XOS group when compared to the placebo group.*[1]
A randomized pilot study in healthy (N = 16) and prediabetic (N = 13)
subjects evaluated the effect of XOS on gut microbiota. Subjects received
2 g of XOS or placebo for eight weeks. Stool analysis was done at baseline
and at week eight to characterize gut microbiota. Among the 40 identified
species associated with prediabetes, four bacterial taxa—Howardella,
Slackia, Enterorhabdus, and Blautia hydrogenotrophica—were abundant
in the group of subjects who were prediabetic. The XOS significantly
modified those species in the healthy and prediabetic subjects, suggesting
a potentially beneficial altering of gut microbes associated with
prediabetes.*[9]
Additional studies have linked XOS supplementation to an increase in
bifidobacteria, demonstrating promotion of intestinal health without
undesirable effects. Xylooligosaccharides have promising potential for use
as an agent for maintaining and improving intestinal microflora balance and
for enhanced overall health and well-being.*[2]
Although researchers have explored the mechanisms associating XOS
with beneficial effects, further studies are needed to examine the precise
physiological role of XOS and other prebiotics on human intestinal tract flora
and in host digestive function.