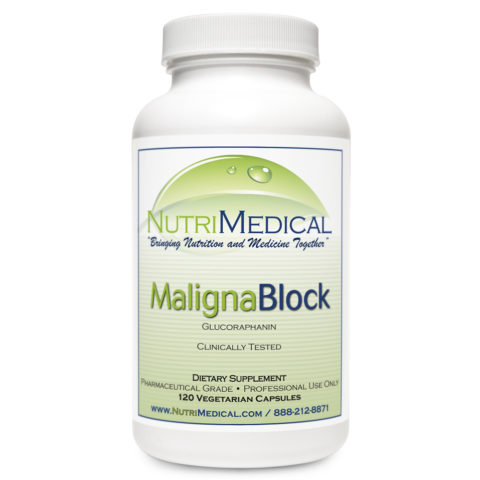 SGS™, the patented ingredient in MalignaBlock and Chem Protect ES, is a phytochemical in broccoli called sulforaphane glucosinolate. Much research demonstrates that when this compound is broken down to its active form, sulforaphane, it safely and effectively upregulates the body’s natural phase 2 detoxification enzymes. Functioning as a long-lasting antioxidant, SGS protects cells from free radical damage, thus promoting overall health and well-being.

truebroc™ broccoli seed extract is obtained using a patented process to extract glucoraphanin (also known as sulforaphane glucosinolate or “sgs”) from its most concentrated cruciferous source—broccoli seeds. Glucoraphanin is enzymatically converted to the extensively researched isothiocyanate known as sulforaphane (SFN). Research suggests that SFN supports long-lasting antioxidant activity and the production of detoxification enzymes. It also extends support to the immune, nervous, and cardiovascular systems, addressing the maintenance of good health throughout adult life. MalignaBlock provides 30 mg of glucoraphanin per capsule and MalignaBlock ES provides 100 mg of glucoraphanin per capsule.*

Discussion Glucoraphanin (also known as sulforaphane glucosinolate or “sgs”) is a naturally occurring phytochemical found in cruciferous vegetables and in MalignaBlock formulas. Glucoraphanin, which is heat stable and water soluble, is metabolized in the body to the biologically active isothiocyanate sulforaphane (SFN). Scientists at Johns Hopkins University School of Medicine isolated sulforaphane in 1992 and identified glucoraphanin as its precursor. Since their discovery, over 500 scientific studies have been conducted on SFN and glucoraphanin, documenting their positive effects on antioxidant activity, detoxification, cellular metabolism, and cell-life regulation.[1-3] Glucoraphanin and SFN appear to be the “missing link” that correlates a diet rich in cruciferous vegetables (from the Brassicaceae family) with good health. Glucoraphanin from food is enzymatically converted to SFN via the action of the myrosinase enzyme during chewing and food preparation (cutting/ slicing). Gastrointestinal microorganisms are able to produce SFN from glucoraphanin as well. Microorganism conversion is an important contribution to SFN production as the myrosinase enzyme is easily inactivated by heat.*[4] Early research identified broccoli sprouts as a concentrated source of glucoraphanin.[5] It is present in much higher concentrations in broccoli seeds and three-day–old broccoli sprouts than in the mature vegetable.[6,7] One capsule of MalignaBlock provides 30 g of glucoraphanin, which equates to approximately 0.33 oz of broccoli sprouts or 8 oz of broccoli. One capsule of MalignaBlock ES equates to 1.3 oz of broccoli sprouts or 27 oz of broccoli.[5] Antioxidant and Detoxification Support Sulforaphane, upon conversion from glucoraphanin, is found to be an effective long-acting indirect antioxidant and significant inducer of phase II detoxification enzymes.[3,4] Research suggests that SFN strongly induces expression of key enzymes (via the KEAP1/Nrf2/ARE pathway), which in turn supports antioxidant activity, redox cycling, and phase II detoxification. The antioxidant enzymes generated are believed to participate in the recycling and maintenance of vitamins A, C, and E as well.[4] After studying the effects of various doses of glucoraphanin administered to study subjects, researchers suggest that there may be a dose-dependent association between glucoraphanin and antioxidant enzyme induction. Accordingly, a metabolically effective dose may vary from tissue to tissue (e.g., upper airway, gastric mucosa, mammary, etc.).[4,8] Activation of transcription factor Nrf2 induces increased output of specialized enzymes, an output that can extend antioxidant activity 72 hours or more. This is a significantly longer activity phase than direct antioxidants, such as vitamin C, vitamin E, and beta-carotene, are able to promote.[2,6,9-11] Adequate antioxidant protection is crucial to maintaining the health and function of cells, tissues, and organs. Because they assist in maintaining health throughout adult life, phytonutrients, such as glucoraphanin and SFN, are considered “lifespan essentials.”[12] Support for Cellular Health and Cell-Life Cycles Glucoraphanin and SFN are believed to play an important role in maintaining healthy gastrointestinal flora; healthy cellular life cycles; immune, eye, and cardiovascular health; and a normal response to inflammation. Sulforaphane’s induction of phase II enzymes, coupled with an inhibitory effect on certain phase I enzymes, is considered to have a protective effect on cells. Research suggests that SFN plays a multidimensional role in maintaining normal cellular life cycles, inhibiting tubulin polymerization, activating checkpoint 2 kinase, and inhibiting histone deacetylase activity.[2,13,14] These actions assist in gene regulation, normal cell growth, and cytokine balance.* Research suggests that sulforaphane’s effect on Nrf2 pathways, macrophage activation, and NF-kappa B may support a normal, healthy response to inflammation and promote cardiovascular and eye health.[2,15-18] Sulforaphane is also studied for its role in maintaining immune health and a healthy gastrointestinal microflora.*[19,20]

Be the first to review “MalignaBlock (120 Caps)”