Psoriasis is a chronic skin disease which results in the person developing red, scaly patches all over their body. Some of the common areas of the body affected the most by the disease are scalp, knees and elbows.

It is a noncontagious disease that has become fairly common among people of all ages and is triggered by inflammatory chemicals produced by white blood cells called lymphocytes,

Psoriasis is a common skin condition that speeds up the life cycle of skin cells. It causes cells to build up rapidly on the surface of the skin. The extra skin cells form scales and red patches that are itchy and sometimes painful.

Psoriasis is a chronic disease that often comes and goes. The main goal of treatment is to stop the skin cells from growing so quickly

Although its symptoms may range from small rashes to the entire body covered with thick, red plagues, depending on the level of the disease, it is the incurable nature of the disease that makes it one of the most intimidating skin diseases.

While it cannot be passed from one person to the next via direct contact or transfer of body fluids, it has been known to affect more than one member of the same family, indicating the hereditary nature of the disease.

The fact that men are over represented in psoriasis registers and consume more psoriasis care have long led researchers to believe that the common skin disease disproportionally affects men. A unique study with 5,438 Swedish psoriasis patients now reveals that women have a statistically significant lower incidence of severe psoriasis compared to men. The study, conducted by researchers at Umeå University and Karolinska Institutet, is published in the American Journal of Clinical Dermatology. CORE:

Psoriasis is an immune-mediated disease that causes raised, red, scaly patches to appear on the skin.

It typically affects the outside of the elbows, knees or scalp, though it can appear on any location. Some people report that psoriasis is itchy, burns and stings. Psoriasis is associated with other serious health conditions, such as diabetes, heart disease and depression.

If you develop a rash that doesn’t go away with an over-the-counter medication, you should consider contacting your doctor.

How do I get psoriasis?

While scientists do not know what exactly causes psoriasis, we do know that the immune system and genetics play major roles in its development. Usually, something triggers psoriasis to flare. The skin cells in people with psoriasis grow at an abnormally fast rate, which causes the buildup of psoriasis lesions.

Men and women develop psoriasis at equal rates. Psoriasis also occurs in all racial groups, but at varying rates. About 1.9 percent of African-Americans have psoriasis, compared to 3.6 percent of Caucasians.

Psoriasis often develops between the ages of 15 and 35, but it can develop at any age. About 10 to 15 percent of those with psoriasis get it before age 10. Some infants have psoriasis, although this is considered rare.

Psoriasis is not contagious. It is not something you can “catch” or that others can catch from you. Psoriasis lesions are not infectious.

How is psoriasis diagnosed?

There are no special blood tests or tools to diagnose psoriasis. A dermatologist (doctor who specializes in skin diseases) or other health care provider usually examines the affected skin and determines if it is psoriasis.

Your doctor may take a piece of the affected skin (a biopsy) and examine it under the microscope. When biopsied, psoriasis skin looks thicker and inflamed when compared to skin with eczema.

Your doctor also will want to learn about your family history. About one-third of people with psoriasis have a family member with the disease, according to dermatologist Dr. Paul Yamauchi with the Dermatology and Skin Care Institute in Santa Monica, Calif.

What type of psoriasis do I have?

There are five types of psoriasis. Learning more about your type of psoriasis will help you determine the best treatment for you. 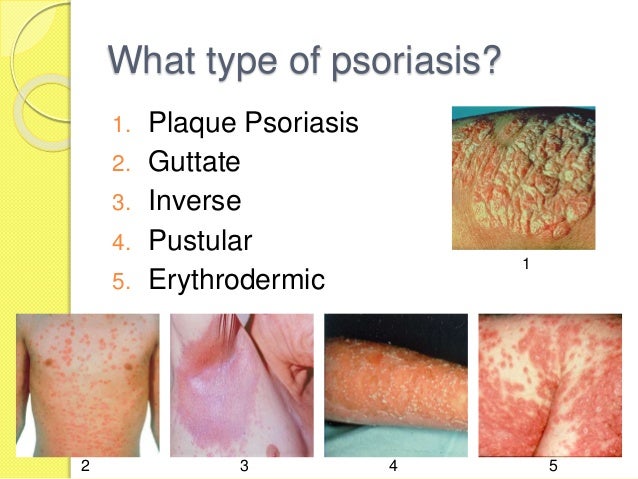 Plaque psoriasis is the most common form of the disease and appears as raised, red patches covered with a silvery white buildup of dead skin cells. These patches or plaques most often show up on the scalp, knees, elbows and lower back. They are often itchy and painful, and they can crack and bleed.

Guttate [GUH-tate] psoriasis is a form of psoriasis that appears as small, dot-like lesions. Guttate psoriasis often starts in childhood or young adulthood, and can be triggered by a strep infection. This is the second-most common type of psoriasis, after plaque psoriasis. About 10 percent of people who get psoriasis develop guttate psoriasis.