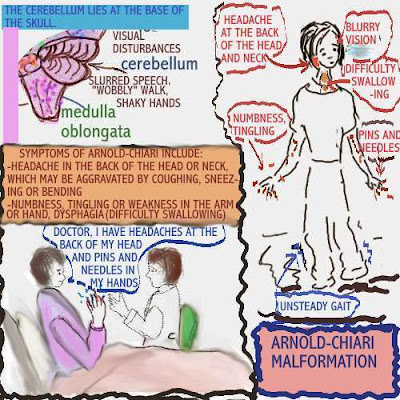 Chiari Malformation (CMs) is considered a congenital condition, although acquired forms of the condition have been diagnosed. They are categorized in order of severity; types I, II, III and IV. CMs are often detected coincidently among patients who have undergone diagnostic imaging for unrelated reasons.

Many people with Chiari I malformation have no symptoms. However, any of the following symptoms may occur, alone or in combination. Some of the symptoms are related to the development of a syrinx (a fluid filled cavity in the spinal cord).

The symptoms associated with a Chiari II malformation can be caused by problems related to myelomeningocele and hydrocephalus. These symptoms include:

An occipital headache felt at the base of the skull that is made worse by coughing, sneezing or straining

Drop attacks – collapsing to the ground due to muscle weakness

Figure 2. Chiari I malformation. With the size of the posterior fossa too small, the cerebellar tonsils may herniate through the foramen magnum into the spinal canal, blocking the flow of cerebrospinal fluid. As the extent of herniation varies among patients, so do the symptoms vary in severity and type. The malformation caused by this bony defect progressively affects the brainstem and spinal cord. The flow of CSF is blocked, leading to a variety of neuromuscular deficits. Syringomyelia, hydrocephalus, and other complications. In some cases, the CSF accumulates within the spinal canal where it eventually forms a syrinx or cyst. This condition, called syringomyelia, causes more neurological problems by damaging the spinal cord. Syringomyelia affects about 65% of patients with Chiari I malformation [1]. In some case, the CSF accumulates within the ventricles of the brain (hydrocephalus); this condition may require placement of a shunt to divert this excess fluid. Bony abnormalities, which affect about 25% of patients, can include basilar invagination and cranial cervical instability.

What are the symptoms?

The symptoms of Chiari I malformation relate to the extent and the area affected by the herniation. Some patients with Chiari I malformation have no symptoms. Other patients are typically affected by pressure-like headaches or pain at the base of the skull or neck. Typical to a headache caused by Chiari I, these symptoms can worsen with physical strain, coughing, or change in position. Symptoms are caused by disruption of the CSF flow and compression of nervous tissues. Some patients experience sensory deficits such as vision problems (e.g., floaters, flashing lights), dizziness, and swallowing difficulties. Motor deficits can include weakness or tingling in the hands or feet, gait problems, difficulties with balance and coordination, or pseudotumor-like symptoms. Symptoms of pain or sensation problems may flare up. Other symptoms may include ringing or buzzing in the ear, sleep apnea, and snoring. Table 1. Common symptoms of chiari I and syringomyelia.

Patients with Chiari I malformations often develop symptoms during their teen or early adult years. Less often, the disorder is seen in young children and older adults. In some cases, trauma triggers the onset of symptoms. The symptoms are complex, progressing over time. Because of this complexity, the condition is often misdiagnosed. At times, Chiari I malformation is mistaken for fibromyalgia, migraine headaches, sinus disease, multiple sclerosis, and other complex disorders of the nervous system. Some patients have waited for years before an accurate diagnosis is made. Accurate diagnosis and plan of treatment is important before the patient’s nervous system suffers permanent injury.

What are the causes?

Recent studies suggest that this malformation occurs during embryonic development. It may be caused by underdevelopment of the bony skull base (posterior cranial fossa). The bony skull may be too small for the normally developed brain, specifically the cerebellum.

Chiari I malformation has been seen on imaging studies in patients of all ages. However, patients typically seek medical attention in their 20s and 30s. Three times more women than men are affected [1]. Some genetic studies show that this condition runs in some families [1]. As each patient may be affected differently, the best medical and surgical management will vary.

How is a diagnosis made?

The symptoms of Chiari I malformation can mimic other diseases. It affects sensory and motor functions. A complete medical history and physical examination can identify if the symptoms are related to Chiari I or another problem. A neurological examination can detect problems with cranial nerves such as gag reflex, facial numbness, hoarseness, double vision, tremors, and disturbances of vision. You may be asked to see an eye (ophthalmologist) or ear (otolaryngologist) specialist to complete your evaluation. Your physician will perform a complete neurologic exam to confirm that the Chiari I malformation is the cause of your symptoms. Your doctor will order one or more imaging studies to confirm the diagnosis.