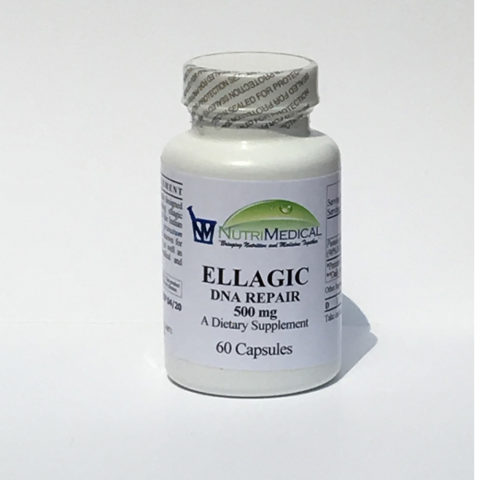 Ellagic acid has demonstrated DNA-protecting properties, including the ability to bind to toxins and neutralize them. Studies have also shown that ellagic acid may protect against chromosome damage and reduce the effects of chemically induced hepatic structural degeneration.

ELLAGIC ACID is a plant-derived polyphenol, possessing antioxidant, antiproliferative, and antiatherogenic properties. Whether this compound has estrogenic/antiestrogenic activity, however, remains largely unknown. To answer this question, we first investigated the ability of ellagic acid to influence the activity of the estrogen receptor subtypes ERalpha and ERbeta in HeLa cells. Cells co-transfected with an estrogen response element (ERE)-driven luciferase (Luc) reporter gene and an ERalpha- or ERbeta-expression vector were exposed to graded concentrations of ellagic acid. At low concentrations (10(-7) to 10(-9) M), this compound displayed a small but significant estrogenic activity via ERalpha, whereas it was a complete estrogen antagonist via ERbeta. Further evaluation revealed that ellagic acid was a potent antiestrogen in MCF-7 breast cancer-derived cells, increasing, like the pure estrogen antagonist ICI182780, IGFBP-3 levels. Moreover, ellagic acid induced nodule mineralization in an osteoblastic cell line (KS483), an effect that was abolished by the estrogen antagonist. Endometrium-derived epithelial cells (Ishikawa) showed no response to the natural compound by using a cell viability assay (MTT). These findings suggest that ellagic acid may be a natural selective estrogen receptor modulator (SERM).

Role of antioxidants in prophylaxis and therapy: A pharmaceutical perspective.

Antioxidants are emerging as prophylactic and therapeutic agents. These are the agents, which scavenge free radicals otherwise reactive oxygen species and prevent the damage caused by them. Free radicals have been associated with pathogenesis of various disorders like cancer, diabetes, cardiovascular diseases, autoimmune diseases, neurodegenerative disorders and are implicated in aging. Several antioxidants like SOD, CAT, epigallocatechin-3-O-gallate, lycopene, ellagic acid, coenzyme Q10, indole-3-carbinol, genistein, quercetin, vitamin C and vitamin E have been found to be pharmacologically active as prophylactic and therapeutic agents for above mentioned diseases. Antioxidants are part of diet but their bioavailability through dietary supplementation depends on several factors. This major drawback of dietary agents may be due to one or many of the several factors like poor solubility, inefficient permeability, instability due to storage of food, first pass effect and GI degradation. Conventional dosage forms may not result in efficient formulation owing to their poor biopharmaceutical properties. Principles of novel drug delivery systems need to be applied to significantly improve the performance of antioxidants. Novel drug delivery systems (NDDS) would also help in delivery of these antioxidants by oral route, as this route is of prime importance when antioxidants are intended for prophylactic purpose. Implication of NDDS for the delivery of antioxidants is largely governed by physicochemical characteristics, biopharmaceutical properties and pharmacokinetic parameters of the antioxidant to be formulated. Recently, chemical modifications, coupling agents, liposomes, microparticles, nanoparticles and gel-based systems have been explored for the delivery of these difficult to deliver molecules. Results from several studies conducted across the globe are positive and provided us with new anticipation for the improvement of human healthcare.

Possible anticancer mechanisms exerted by polyphenolic compounds contained in fruits and vegetables include antioxidant activity, the inhibition of proliferation, and the induction of apoptosis in cancer cells. This study examined the effects of four isolated polyphenolic extracts from red muscadine grapes (Vitis rotundifolia) on vital cell parameters and the induction of apoptosis in Caco-2 colon carcinoma cells. The magnitude of effects in cell culture was then correlated to polyphenolic composition and antioxidant capacity. Whereas anticancer effects of individual polyphenolic compounds have been demonstrated multiple times, information relating to anticancer effects of polyphenolic extracts is not available in abundance. All four extracts induced apoptosis, decreased cell number, and caused alterations in cell cycle kinetics in a concentration-dependent manner. The efficacy of the polyphenolics on vital cell parameters correlated well to the presence of ellagic acid glycosides and flavonoids and also to the antioxidant capacity. This study demonstrated the anticancer properties of ellagic acid rich extracts from red muscadine juice.  PMID: 16848514 [PubMed – indexed for MEDLINE]

Current trends and perspectives in nutrition and cancer prevention.

There is an increasing evidence that dietary phytochemicals may play important roles as chemopreventive or chemotherapeutic agents in prevention of many diseases, including tumors. The purpose of this study was to examine antimutagenic effects and effect on the immune response of representative series of substances which commonly occur in human diet. Using the Ames bacterial mutagenicity test and in vivo chemiluminescence test, we investigated antigenotoxic and immunomodulatory effects of juices and vegetable homogenates (carrot + cauliflower, cauliflower, red cabbage, broccoli, onion, garlic) on the genotoxicity of AFB1 and pyrolysates of aminoacids. Using the Ames test and in vivo micronucleus, the chemiluminescence test, the blastic transformation test and the comet assay we examined antimutagenic effects of chemically identified chemoprotective substances in the pure form (resveratrol, diallylsulphide, phenethyl isothiocyanate, ellagic acid, epigallocatechin gallate, genistein and curcumin) on mutagenicity induced by three reference mutagens: aflatoxin B1 (AFB1), 2-amino-3-metylimidazo[4,5,-f] chinolin (IQ) and N-nitroso- N-metylurea (MNU) and effect of phytochemicals on the immunosuppression caused by these mutagens. All complete vegetable homogenates and substances of plant origin tested, showed a clear antimutagenic and immunomodulatory activities on mutagenicity and immunosuppression induced by reference mutagens. Only in the Ames test the effect of some phytochemicals against direct mutagen MNU was lower compared to indirect mutagens AFB1 and IQ. Similarly, resveratrol and epigallocatechin gallate had no inhibitory effect on mutagenicity MNU in the Ames test.

BACKGROUND: Recent phase III studies in hormone refractory prostate cancer (HRPC) showed an improvement in terms of overall survival (OS), objective response (OR) and biochemical response (BR); however, chemotherapy is usually accompanied by negative side effects that determines poor quality of life (QoL) and only marginally improves individual clinical response (ICR) in terms of pain relief and performance status. Ellagic acid is a polyphenol that is found in many species of flowering plants. It is an antioxidant that determines apoptosis, down regulation of IGF-II, activates p21 (waf1/Cip1), mediates the cumulative effect on G1/S transition phase and prevents destruction of p-53 gene by cancer cells. ENDPOINTS: The aim of this study was to assess the effects of ellagic acid support therapy on toxicity, OR, ICR and BR in HRPC patients treated with estramustine phosphate and vinorelbine. MATERIALS AND METHODS: Patients with HRPC were randomly distributed in two study groups: a control group (group A) who underwent chemotherapy with vinorelbine and estramustine phosphate, and an experimental group (group B) where chemotherapy regimen was associated with ellagic acid. RESULTS: The mean number of chemotherapy cycles/patient was 4 (range 3-8 cycles) and 6.5 (range 5-11) in group A and B patients, respectively. A reduction in systemic toxicity, statistically significant for neutropenia, associated with better results in term of OR rate, ICR, and BR were observed in group B compared with group A. On the contrary no significant difference in OS and PFS was detected between groups. CONCLUSIONS: our study suggests that the use of ellagic acid as support therapy reduces chemotherapy induced toxicity, in particular neutropenia, in HRCP patients; however, further studies are required to confirm our results.PMID: 15774240 [PubMed – indexed for MEDLINE]

Evaluation of estrogenic/antiestrogenic activity of ellagic acid via the estrogen receptor subtypes ERalpha and ERbeta.

Be the first to review “ELLAGIC ACID (60 Caps)” Cancel reply