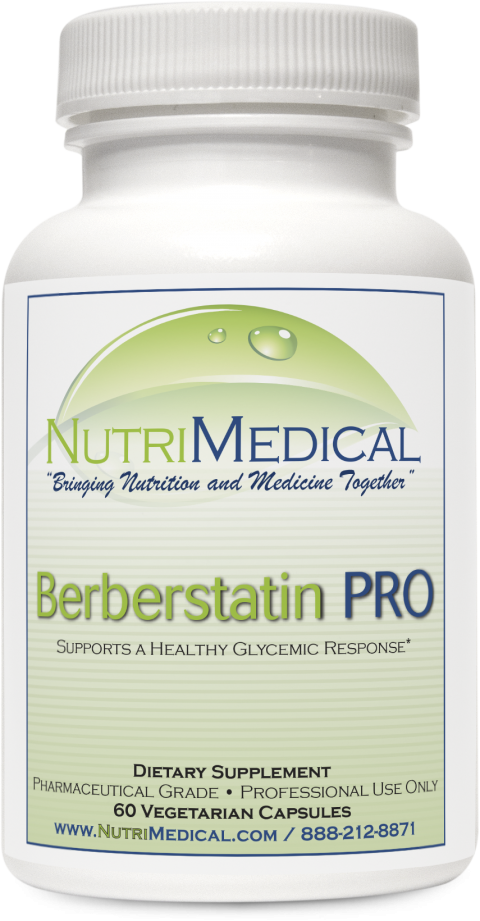 
BerberStatin Pro with InSea2® features berberine, a naturally occurring plant
alkaloid used for supporting healthy blood glucose levels, and InSea2®,
a clinically studied blend of polyphenols derived from sustainably
harvested, wildcrafted brown seaweed shown to support a healthy
glycemic response to food.*
Available in 60 vegetarian capsules
Discussion
Berberine is a plant alkaloid derived from several different plant
species that have been used in Ayurveda and traditional Chinese
medicine for a variety of therapeutic applications, including supporting
healthy blood glucose metabolism and a healthy insulin response.[1]
Although research has clearly demonstrated berberine’s effect on blood
glucose, the mechanisms through which this effect occurs are not
entirely clear. Researchers have hypothesized that the modulation of
gut microbes may be one mechanism by which berberine affects blood
glucose metabolism.[2] Animal and in vitro studies have suggested that
berberine moderates glucose metabolism through a multi-pathway
mechanism that includes AMP-activated protein kinase, the JNK
pathway, and the PPAR-alpha pathway.[3,4] Additionally, berberine has
been observed to inhibit the expression of disaccharidases in the
duodenum, resulting in less glucose being formed from carbohydrate
digestion. Berberine also appears to improve the function of beta cells
in the pancreas.*[5]
Although more research is needed to evaluate the effect of berberine in
healthy subjects, several trials have assessed the hypoglycemic effect
of berberine as an adjuvant with existing treatments. These studies
were primarily in subjects with type 2 diabetes who were administered
berberine doses ranging from 1,000 to 1,500 mg per day. The results
demonstrated a reduction in HbA1C, fasting blood glucose, and postprandial plasma glucose levels.*[1]
The branded ingredient InSea2® is a blend of polyphenols derived
from the wildcrafted brown seaweeds Ascophyllum nodosum and
Fucus vesiculosus that are sustainably harvested from the North
Atlantic Ocean. InSea2 plays a role in the inhibition of alpha-amylase
and alpha-glucosidase, two key enzymes involved in the digestion
and assimilation of starch and sugar. Clinical studies with InSea2
have shown an effect of reducing post-prandial blood glucose levels,
improving insulin sensitivity, and maintaining optimal blood glucose
metabolism.*[6,7]
A randomized, double-blind, placebo-controlled trial in dysglycemic
patients (N = 65) evaluated InSea2 (combined with 7.5 mcg of
chromium picolinate) on glycemic status over a six-month period.
At the end of the study period, 18.2% of patients in the test group
returned to normal glycemic status compared to no change in
glycemic status in the placebo group. In addition, a significant number
of subjects changed categorization from impaired fasting glycemia
to impaired glucose tolerance, suggesting improvement in insulin
sensitivity and glycemic status in the test group. Overall, subjects in
the InSea2 test group had statistically significant improved markers
for glycemic health, whereas the placebo subjects—exposed to
the same diet and physical activity program—showed a decline in
glycemic health markers.*[6]
A randomized, double-blind, placebo-controlled, crossover study in
healthy subjects (N = 23) aged 19-59 years examined the impact of
InSea2 on post-load plasma glucose and insulin concentrations. Two
capsules with 250 mg of InSea2 were consumed 30 minutes prior to a
50 g load of carbohydrate, and plasma glucose and insulin responses
were measured over a three-hour period post-ingestion. Consumption
of InSea2 showed a modulation of insulin homeostasis following
ingestion of a carbohydrate-rich meal.*[7]
Berberine with InSea2 combines clinically studied levels of berberine
and InSea2 and is formulated to support a healthy glycemic response
to ingested foods while maintaining healthy blood glucose levels.*