The way to purchase our product is directly from our site.  www.pblifelite.com

This is our military and first responder code.

The LifeLite® offers the right solution for a non-lethal approach to your personal protection and to protect your family when their safety is threatened.

As featured on Good Morning America

The PepperBall® LifeLite™ combines a bright, LED flashlight with a launcher to offer covert protection in plain sight. Designed to launch non-lethal PepperBall® projectiles from as far as 60 feet away, the built-in laser guide helps the user find and hit the target with ease, and a safety switch ensures that LifeLite™ won’t fire until you want it to.

Based on 9 reviewsWrite a review

Nice to have on-hand

Haven’t had to use it for self defense (thankfully), but it worked as expected with the inert rounds. Plan on buying more practice rounds as its been a while since I’ve tested it and I’ve dropped it a few times (want to ensure the laser is still aimed properly). Be sure to check the live rounds for fractures if you do drop the launcher though. I had to switch to some spare live rounds I bought after finding tiny cracks in the last set (instructions warn against using damaged rounds).

This is a very well made arm. I found it to be very accurate and it hit at laser point of aim (2″ spread) at 30 feet. The launcher looks like a large Maglight® and is as bright as one. The ability to load the launcher and stage it for use without the C02 cartridge being pierced until you press the trigger is a huge plus. The launcher can be staged, ready for use, like any outer defensive weapon. It is large, heavy, and could be a handful for someone with small hands but as with any arm practice, practice, practice. With practice anyone should be able to use this launcher with devastating effect.

Saw at RV show – too big for small hands

We really liked the concept for traveling when we saw the LifeLite at a show over 3 years ago, and would have bought one by now but the size and weight make it difficult for women without large hands to comfortably carry or to control the launch button securely.

We were told they were working on a smaller version for just that reason. When we checked back nearly a year ago we were told that was still the buzz but no idea when it would be on the market.

I have been carrying this light for awhile. I have a business and use it when visiting especially at night. It goes unnoticed which is exactly what I want. The flashlight is bright and the original batteries are still in it. The CR 123 batteries are readily available and cheap if purchased in multipacks. I plan to purchase more for my wife and children.

The PepperBall® TCP™ offers the right solution for a non-lethal approach to personal protection, giving you both distance and power. Whether you are at home, on the road or enjoying the outdoors, the TCP™ gives you control over any unforeseen circumstances.

With a 6-round capacity, the TCP™ launches both standard round projectiles and VXR™ projectiles (sold separately), with accuracy up to 150 ft.

No reviews yetWrite a review Tippmann Stryker MP2 Elite review by Trails of Doom paintball. I’ve been playing paintball for over a decade, and this marker just plain ROCKS! First off, it is compressed air ONLY, if you get it and hook up co2 to this marker, you will fry it… So just use compressed air!

This model comes with the newly designed Rip clip which is a noise activated speed hopper that will load a ball every time you fire. When you first get it, you may have to tap on the side to make it think you fired to load the breech as it has a spacer that pushes the hopper further to the side which gives you the ability to see down the top of the marker (unlike most paintball guns that feed from the top center). This makes the feeder need to have at least 3 balls in the feeder area before it will fire. The loader uses 2 9v batteries and does not have an auto off, so be sure to turn it off when you are done, and don’t lay it near something that can tap the on button or it will kill your batteries!

The Stryker is an electronic marker so it has a 9 volt in the grip of the marker to control the fire rates. Other reviews said you can’t adjust it, but they clearly didn’t read the manual… You cycle through the modes by hitting the on/off button, holding it down turns it off, tapping it cycles through the settings. I leave it on the fast blinking green setting. You can even turn the eyes off, if you get them dirty and don’t have time to clean while in a game. (red settings). This marker is limited at 10bps. The ramping setting is very fun! I’ve used this marker a ton since I got one of the first ones, and it is an amazing marker. If you want to see it in action, check out “Trails of Doom” on youtube.

This model also comes with an Apex 2 which is a very effective barrel backspin system when used in the woods, as normal barrels curve when you fire, and you end up hitting tree branches instead of your opponent. But, with the Apex 2 set on 3 clicks (from the back, move it forward 3 clicks) it will shoot flat! Making it SO much easier to get guys out even at long range in woodsball! At distances they only dream of! I run mine at 270fps typically. The spool valve is simple to access (remove 2 bolts and unscrew the valve and you can change o-rings or add grease). You can also remove the back stock and replace it with a end cap off a Tippmann 98 (same size). For $299 this is a heck of a marker! Just don’t try hooking up co2 to it as you will fry it! This feels very real, and sturdy, the plastic body isn’t like other low end markers and feels more like a real gun. The plastic grip is also very comfy. To see a video review of this marker, click here.

I have plenty more videos of this marker on my channel, so check ’em out!

FreeEnterprise AKA Trails of Doom

Images in this review 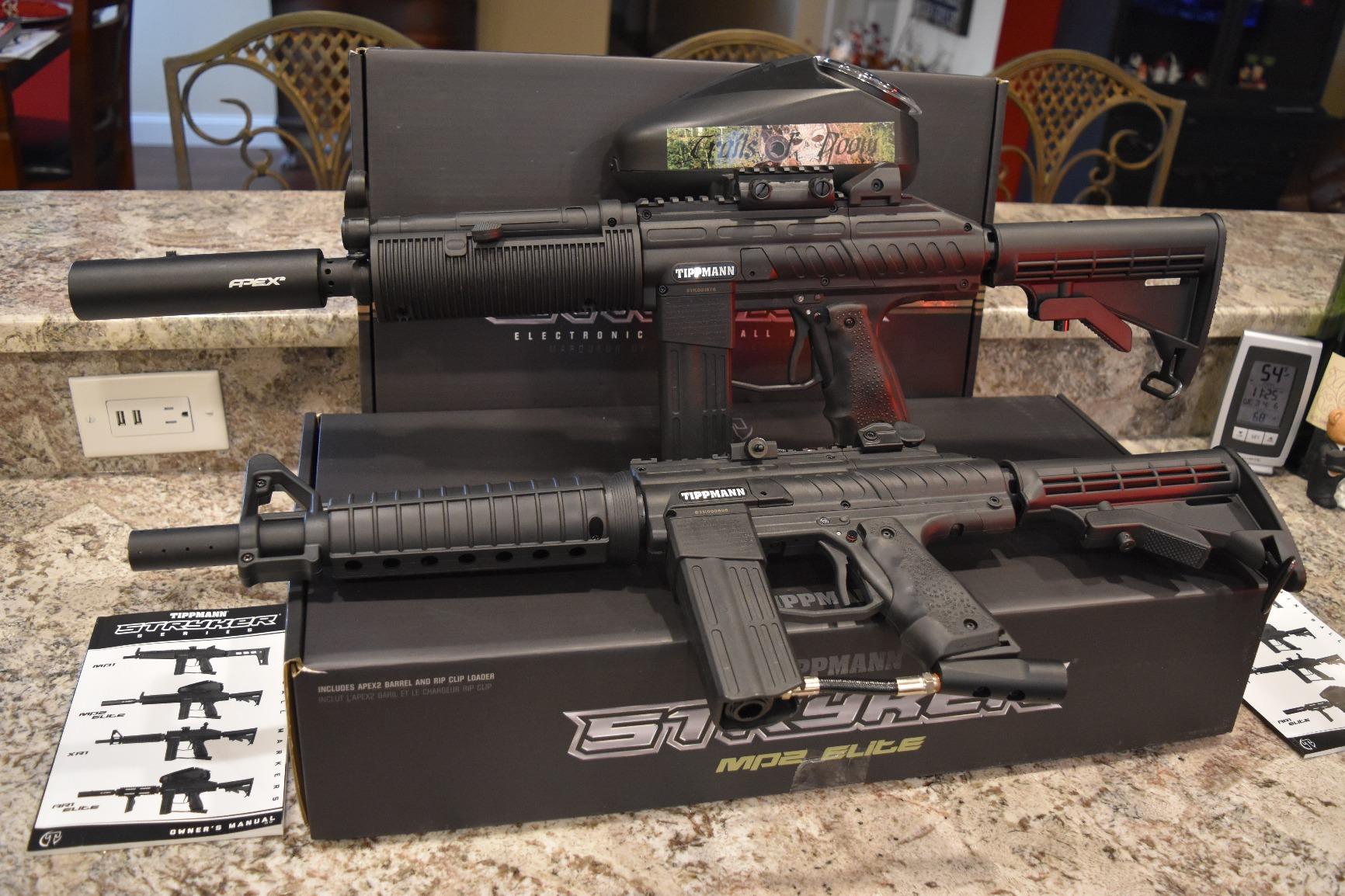 I think I found a better one.  Same company, newer model that includes a rail system to hold the sight you want to add to it.

No products were found matching your selection.